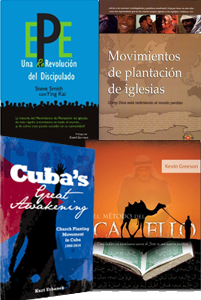 David Garrison’s Church Planting Movements has been translated into 20 foreign languages, and today, Spanish speakers can get the full translation, Movimientos de Plantación de Iglesias, in Spanish from our CPMs.com bookstore.

In his global survey, Garrison identified one of the world’s best CPM practices in T4T, Training for Trainers, the explosive movement that has produced more than 2 million disciples and more than 150,000 new church starts in Asia.

In 2011, Steve Smith with Ying Kai, brought T4T to print in T4T: A Discipleship Re-Revolution. Now, for the first time, T4T is available in Spanish in the CPMs.com bookstore as EPE – Una ReRevolución del Discipulado.

Head on over to the bookstore to purchase/download these outstanding resources!